I love Powershell. You can do some really cool things with just a few lines of code that you would struggle to do any other way. There’s quite a community around Powershelll providing a fair number of tools. Here’s a round-up of a few I have used.

PowerGUI is a project supported by Quest Software consisting of a GUI front end for Powershell and a neat script editor. PowerGUI is easily extendable through its powerpack feature. By my reckoning there already over 100 powerpacks available that help you manage SQL Server, VMWare, Citrix, Sharepoint and fun things like Facebook Organizer and Twitter Powerpack

PowerGUI exposes the Powershell code it uses, similarly to T-SQL scripting in SSMS,  making this a useful starting point for your own scripts. 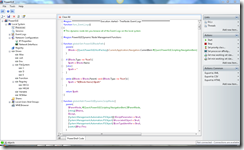 Windows Admins may find PowerGUI useful for many tasks but I’m much more of a scripter so I really like the Script Editor. It’s lightweight and has intellisense support helping out when writing scripts. It terms of Powershell editors this one gets top points from me.

This product ships with Powershell 2.0 and is Microsoft's own stab at a GUI for their fantastic scripting language. The environment is very basic, something they freely admit, and doesn't compare to the other products on this page. Perhaps one to watch in the future but this doesn’t really provide anything exciting in my view yet.

Yep, a tool to build GUI’s in Powershell! As Powershell can utilise the .Net platform this was bound to happen sooner or later. In terms of GUI building it’s quite feature complete. A large number of toolbox components are available.

Anyone used to GUI building tools will feel right at home getting productive right away. One drawback seems to be the fact that you have to export Powershell code to add functionality to events (i.e. button clicks). While I can’t seem myself building any serious applications with PrimalForms it’s a fun little tool that may be useful for building little utilities.

This is something I’d really like to see SSIS provide out-of-the-box. No installer yet. Looks like you have to compile from source to start playing with it. See my Powershell Script Task for SSIS post for more details. 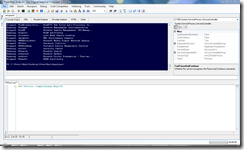 While Powershell Analyzer is probably far more feature packed than PowerGUI I just couldn’t get on with it. The number of buttons and tabs is quite bewildering and provides far more than most of us need. I think only the most advanced users who need to live in Powershell will find this useful.

I really like the idea of PowerTab but I simply can’t get on with it. There’s a really cool PowerTab Demo but I can’t make it do that! Looks like I’ll be sticking with a GUI for now!